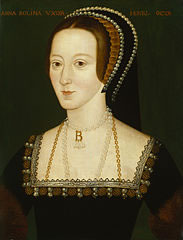 Although I have found no evidence that she ever visited Pembrokeshire it is a fact that Anne Boleyn (c1501 – 1536 ) was granted the Marquessate of Pembroke in 1532 by King Henry VIII, whose second wife she would later become.

After having lived abroad for a number of years Anne Boleyn returned to England in 1522 and took up a post as Maid of Honour to Henry VIII’s wife, Catherine of Aragon. In the spring of 1526 Henry started to pursue Anne but she resisted, refusing to become his mistress. Henry quickly became obsessed with the idea that he should divorce Catherine in order to be free to marry Anne. However, Henry’s divorce could only be granted by permission of the Pope. Years passed before the situation was resolved and some historians believe that Henry’s having granted Anne her Marquessate was at least in part a demonstration of his thanks for her patience in waiting for him to be free to marry her. Whatever the reason it was a significant action in many ways, including:-

The Pope never did grant Henry the divorce he wanted and this led to the eventual breaking of the power of the Catholic Church in England and Henry’s assumption of control of the Church of England. Henry and Anne were married in January 1533, although Henry’s marriage to Catherine wasn’t formally anulled (by English church officials) until May of that year. Henry’s marriage to Anne was made valid in May 1533. In June 1533 Anne was crowned Queen of England, and in September of the same year she gave birth to Henry’s daughter, Elizabeth.

Just three years later, in 1536, Henry was courting Jane Seymour and Anne was being tried on charges of treason. She was found guilty and beheaded in May 1536.