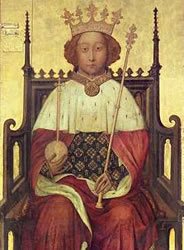 Richard II (1367 – 1400) was arrested in Haverfordwest in 1399 and taken to Flint Castle. He died soon afterwards, reportedly in suspicious circumstances, in Pontefract Castle.

Richard II became King of England in 1377, when he was just 10 years old. At that time it was agreed that the country would be nominally ruled by Richard, but his actions would be guided by a series of councils made up of members of the aristocracy. The reason for this was that the Parliament of the time didn’t want Richard’s Uncle, John of Gaunt, to act as Regent on his behalf. Concern about Richard’s dependency on a small group of courtiers for advice led to control being taken over by a group called the Lords Appellant in 1387. In 1389 Richard declared himself of age to be crowned, and he continued to rule in harmony with the Lords Appellant until, in 1397, he turned on them and had several of them either exiled or executed. When John of Gaunt died in 1399 Richard took the opportunity to have Gaunt’s son, Henry of Bolingbroke – who had already been exiled – disinherited. Richard – not anticipating any reaction from Bolingbroke – then left with his army to quell a rebellion in Ireland.

Bolingbroke, who was in France at the time, immediately returned to England and gathered an army. He insisted at first that his only intention was to regain his inheritance. However, when Richard arrived in Haverfordwest on his return from Ireland he was immediately arrested by Bolingbroke’s men and imprisoned in Flint Castle. Allegedly, although some historians disagree, Richard was persuaded to renounce the throne in favour of Bolingbroke. Whatever the facts may be, Bolingbroke was crowned King Henry IV in September 1399.

Richard died, a prisoner in Pontefract Castle, in 1340. Some say he died of starvation, others that he was murdered on the orders of Henry IV who feared that some loyal supporters were planning to kill Henry and restore Richard to the throne.